How Does Drinking Impact the Body?

Occasionally I enjoy giving back to the community in any way possible. As I was recently conducting a seminar for college students on the importance of nutrition, I opened the floor to questions they had regarding any topics ranging from diet, nutrition, and overall wellness.

I received a number of common questions not out of the ordinary such as adolescent teenagers looking for the best ways to build muscles and young girls asking if working out would make them look “too muscular.”

One question I wasn’t expecting was, “Can I be healthy and still drink alcohol?”

Leading with the caveat that this knowledge was restricted to those of legal drinking age, I began to recount research I had been exposed to over the years.

“While drinking can be enjoyed in moderation, it no doubt has profound effects on the body. You must strike a balance between having fun and taking care of your health.”

Alcoholic beverages have been consumed by humans for thousands of years as a means of enjoying social and ritualistic events.

I’ll go over some of the key topics I covered with them in this piece to give you a better idea of how alcohol affects your body.

There is no secret alcohol can have a negative effect on body composition. In our society we refer to people with larger stomachs as “beer bellies” or “beer guts.” Pure alcohol contains 7 calories per gram making it the most calorically dense form of energy other than fat which contains 9 calories per gram.

In a study with a large-sample size of over 27,000 men, alcohol intake was linearly correlated with the following risk factors:

As you can see, alcohol intake was associated with increasing BMI and metabolic abnormalities.

Not only can alcohol increase risk factors for cardiovascular disease, but it can also increase the prevalence of obesity and other body composition factors.

Alcohol can also affect the performance of athletes. For those striving to achieve peak performance, it can hinder their goals of becoming the very best.

In a study performed on 13 male cyclists, a 60 minute cycling endurance performance test was conducted before or after drinking an alcoholic beverage. The results showed the group drinking alcohol had decreased levels of cycling power output compared to the non-drinking group.

This was just with a single drink. Imagine the effects of drinking several alcoholic beverages! 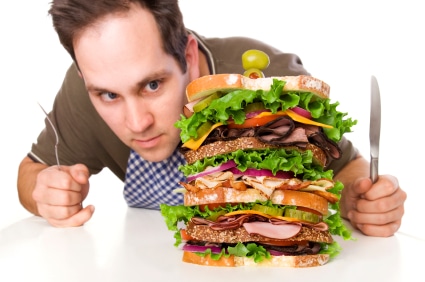 If you’ve ever tended to snack a bit more while drinking you aren’t alone. There’s a reason why 3am pizza and fast food drive thru mainly occurs when inebriated.

In a study conducted on 26 males, half were given an alcoholic beverage while the other half were not. They were then put in front of a large buffet where they could eat whatever they wanted. Unsurprisingly, total calorie intake increased by 30% in groups that had alcohol.

When you consume alcohol, the brain shifts into starvation mode which increases hunger and appetite. Studies performed on animals have proven that alcohol intake increases the activity of brain cells used to regulate appetite.

Typically, when the body consumes calories appetite should be decreased. However, with alcohol the opposite effect generally occurs. Subjects ate more when given alcohol due to increased activity in these areas of the brain.

People typically tend to have lower inhibitions while drinking as well. You may throw away any sort of personal dietary restraints while drinking. This combined with the increased activation of appetite hormones may result in you eating far more calories than your body needs.

Chronic consumption of alcohol can also have negative effects on the body’s homeostasis. Drinking large quantities of alcohol can disrupt the communication channels between the nervous, endocrine, and immune system leading to hormonal imbalances.

If hormonal deficiencies occur this can lead to a number of negative health side effects including:

For women, they may be at particular risk for hormonal imbalances that can damage their ability to reproduce. Women who are pregnant or attempting to get pregnant should be screened for alcohol consumption. There is no safe dose for pregnant women drinking alcohol as it could drastically decrease their ability to give birth to a healthy functioning child.

Men are not immune to reproductive harm either. A decrease in the quality of semen has been noted consistently in heavy users of alcohol leading to sexual impotency.

How Much is Too Much?

There has always been a constant debate as to how much drinking can be considered healthy. While some say having a glass or two of wine per day can be beneficial to the body, others have decried alcohol as an altogether negative substance.

If you are an individual that struggles to moderate their own drinking habits or if you already suffer from certain ailments, it may be beneficial to avoid drinking altogether.

What Should You Do?

Going back to my presentation with the college students I reinforced the idea that chronic binge drinking is never a good idea. While college aged students may be more prone to regular drinking, they should always do so in moderation (and legally of course).

So going back to my original question, YES you can drink and still be healthy IF you know your limits and practice moderation. Although small amounts of alcohol will likely not hurt your long-term health, it's important to keep consumption in check.

If you have any additional health related questions, please feel free to send them my way. Let’s reach our goals together.